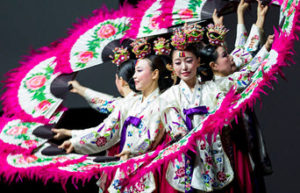 Sounds of Korea is one of the best known Korean dance and music group in the United States. This New York-based Korean professional performing group consists of a dance troupe, an instrumental chamber ensemble, and a percussion ensemble.

Sue Yeon Park. The Director of this program and well-known dancer and musician learned to dance and music from Master Yi Mae-Bang, designated a Living National Treasure by the Government of Korea.

Sounds of Korea has performed at major concert venues including Lincoln Center and many national festival stages.